What is the difference of Delta 8 and HHC?

With all the different cannabinoids popping up it can be confusing to determine which, if any are right for you. We will take an in depth look at both and compare the differences and similarities. Each offer similar effects while giving a slightly different experience. Understanding those differences allows you to tailor your own experience depending on your preferences.

Continue reading to learn whether HHC or Delta 8 is right for you.

Let’s start off with looking at their similarities. All cannabinoids consist of the three same: elements, carbon, oxygen, and hydrogen. The differences start when we look at how each of these elements are assembled together.

Here is a chart comparing each compound for a quick visual understanding of each.

How Strong is HHC Compared to Delta 8?

To get a good sense of this we will compare both to Delta 9 THC (weed). Bear in mind that everyone will have various effects based on factors such as physical characteristics, tolerance, and psychological makeup. Most report Delta 8 to be roughly 60% as potent when compared to Delta 9 THC. Even though this is the case, a lot of people find the effects of Delta 8 to be more enjoyable. HHC is roughly 80% as potent as Delta 9, without the lethargic effects that can be common with Delta 9. This alone makes HHC an attractive offering for those looking for the strongest option when Delta 9 is either not legal or not preferred.

How is it Made? Natural or Synthetic

Both HHC and Delta 8 are naturally found in the cannabis plant in small amounts. Delta 9 THC can be found in concentration levels of up to 30% whereas Delta 8 and HHC constitute no more than 1% in the raw plant. This means that in most cases these cannabinoids are, albeit natural, created in a lab. This is not necessarily always the case for HHC however, HHC can be synthesized synthetically. HHC created in this way is not considered legal, being as it would then not be hemp derived. Be sure the products you are choosing are from a reputable source and contain natural ingredients.

Other cannabinoids like THCP, THCC, THCB, and THC-O are not naturally occurring whatsoever and are considered synthetic.

As with Delta 8, HHC has all of the same product types. So, no matter your preferred method of consumption you should be able to find both HHC and Delta 8 in disposable vapes, vape cartridges, tinctures, and edibles.

Effects of HHC and Delta 8 Compared

Besides the clear difference in potency, it is interesting to note that the “tone” of the experience from each is slightly different. Most users report a slightly more focused and productive high from HHC. This makes it a great option for tasks that require a higher level of focus. Where Delta 8 users primary report more feelings of euphoria and a higher level or relaxation and calmness.

HHC and Delta 8 Side Effects

Side effects of HHC and Delta 8 are very similar to Delta 9. Users often report slightly higher occurrences of unwanted side effects with Delta 9. This can most likely be contributed to Delta 9’s higher potency.

The most common side effects of all three are:

It should be noted that taking higher doses does increase your chance of experiencing these unwanted side effects. When comparing all three compounds at a similar dosage of each, Delta 9 is more likely to cause these effects.

At the moment HHC is legal in all 50 states, Delta 8 is legal in 38 states, and Delta 9 is only legal in 16. Delta 8 and HHC are both federally legal due to the 2018 Farm Bill and its legalization surrounding hemp-derived products. This bill defines all hemp-derived cannabinoids that contain less than 0.3% Delta 9 THC.

Although there isn’t any HHC specific legislation found in the United States at this time, the safest approach for many would be to assume that states that have banned Delta 8 would also consider HHC banned.

Delta 8 has been available on the market now for quite some time, in fact its popularity has skyrocketed. HHC on the other hand has not quite reached that same level of success. For that reason, HHC availability has been less than that of Delta 8. It does look to be continuing to grow as more and more companies are starting to add HHC product offerings. HHC’s legal status will also most likely boost its popularity, being legal in states that have banned Delta 8.

Will HHC or Delta 8 Make You Fail a Drug Test?

Yes, it is very likely that both of these cannabinoids will make you fail a drug test if you’ve consumed them within a few days prior to testing. If you are subject to drug testing it is best to avoid both Delta 8 and HHC.

Keep in mind, how long each stay in your system can vary depending on how often you take them, the dosages taken, and your metabolism. On the topic of dosage, those who take higher dosages of Delta 8 and HHC may find that they are detectable in your system for much longer than those who take the average dosage.

Even though both compounds share similar chemical properties, each offers a slightly different experience. HHC is more often chosen by students and professionals looking for its energy and creative boosting attributes. Delta 8 is best used for the afternoon or evenings for those looking for more relaxing qualities.

Based on legalities alone, you may be limited to which you choose. HHC makes a great option for anyone living in a state that has banned Delta 8 and of course for those are living in any area where Delta 9 is not legal. If you are not confined by these restrictions, it is best to try a small dosage of each as a great way to experience their differences and explore which works best for you. Keep in mind it is best to try each of these cannabinoids separately to accurately determine their individual effects.

The effect is relaxing, but not sleepy and it gives that tiny little munchie feeling in your tum. Awesome company! Great customer service, fast shipping, and free sample with order! These would make great gifts or to keep on hand during the holidays to get dazed 💜😎🌲

Picked this up and love it. Only problem now is that I'm stuck not sure which to try next. Probably go with this again and the Cali-O

I am a big fan on hybrid strains and this did not let me down. I'm ordering more of these

This pen is super smooth. No cough and no nasty taste. The effects are great but would say I thought it would be stronger. Never the less the effects are there for sure. Definitely a little stronger than the THC O. Not for the new user but a good option for someone wanting a boost from D8 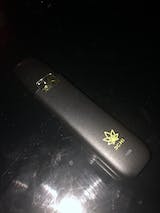 To be honest I am usually a fan of anything banana flavored... this cart is no different. Outstanding taste and showed up at my door very quickly